Bom dia from Nazaré, 250 kilometers into a dream cycling journey along the Portuguese coast from Porto to Lagos.

My second visit to this beautiful country and my first time backpacking is off to a great start passing along the beautiful coast and through adorable villages, enjoying warm dinners and sunny coffee breaks. I’ve found Portugal is a wonderful and affordable place to explore on your own, especially on two wheels.

I’m touring on a racing bike borrowed from a friend, doctored to accommodate a rack purchased from Decathlon. The light frame and fit will help me maintain a steady pace along a patchwork of roads that loosely follow along the coast and in south, the Fishermens Trail, also know as the Rota Vicentina. The ride is meant to be simple with the freedom to dismount and take day hikes or explore on foot in villages or beaches. A tent, sleeping bag, pad, spare tubes, pump, odometer, power bank, lock, tarp and small supply of clothing are in tow. For ease of travel and to experience the local cuisine along my path, I decided against carrying cooking supplies; Portugal is a great place to find cheap, delicious meals and fresh produce and my route never strays too far from the beaten path. I am however, carrying a wine bottle opener and utensils. 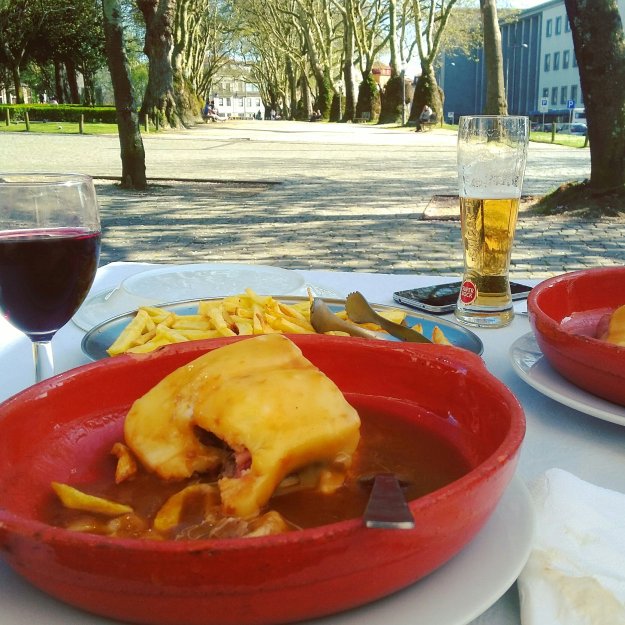 A dinner of Francesinha and wine in Porto.

Planning the route was a challenge as there is no single cycling coastal route. While waiting for the bikes to arrive (shipped from Austria) my travel companion and I explored Lisbon by day and examined maps and organized our itinerary by night. The biggest issue with the planning was eliminating some dream stops from the trip – for me this included Coimbra and Sagres. There are simply too many historical and alluring sites in Portugal for one trip but once we acknowledged this, it was easy to agree to a rough path. The itinerary is loose enough to add days in places we loved, or to wait out bad weather and make small detours if something amazing or unexpected showed itself along the way. We decided to research multiple places to stay each night and pick the option that made the most sense on the go. Our route began in Porto and hits Nazaré, Obidos, Sintra, Parque Natural da Arrábida, Aljezur and Lagos. When cycling paths are available we will follow them but we are also using major roads in some stretches to save time. The journey also includes a train trip from Lisbon to Porto, our starting point, and two short ferry rides, one over the Tagus in Lisbon and the other from Setúbal to the Troia Peninsula. The route will cover about 700 kilometers in total over two weeks.

You could say things officially began in a north suburb of Lisbon where we assembled our bikes and then boarded a train to Porto. We found our tickets a few days in advance on the Rail Europe website. One way to tickets were about 30 USD and the bicycles were free to transport, however, we had to chose a seat on a train that still had room for the bikes. Before leaving we made a stop off at a suburban Decathelon to buy spare tubes, a mini pump, bike rack, sleeping pad and padded cycling bottoms. These items were cheaper than they would be at home and the quality was appropriate for our needs.

The bike all packed up.

Porto is an interesting city to explore and has it’s own feel, much different than Lisbon. We found a cycling-friendly hostel not far from the train station and after securing our bikes inside we wandered around the Baixa neighborhood and riverfront. The beautiful weather and springtime air added the perfect touch to a lovely evening of rich food and lots of port. I almost wanted to delay the trip to spend more time in the city but I knew I was likely to become attached to every destination and would have to learn to move on – something I always find hard while traveling.

The following morning we crossed the Ponte Luis and took an immediate right onto the Av. Diogo Leite. A bike friendly riverfront road follows along the Douro until the Atlantic coast at the Douro Estuary Viewpoint. We then took off south along the coast on a well marked and maintained cycling path. Cafes and markets are everywhere on the first 100 kilometers and most communities have bike parking and a welcoming vibe to cyclists. It felt largely suburban and was a good opportunity to tweak the bikes and the packing system before we were far from civilization. If we were to have forgotten anything or needed a change it would have been easy to find a bike shop or hardware store. 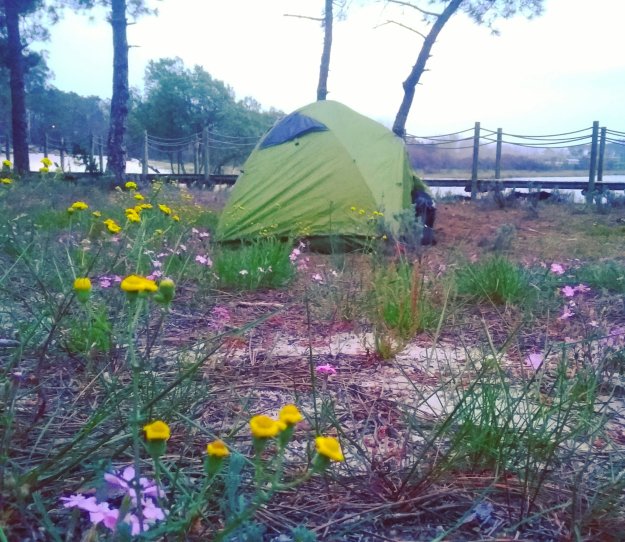 The first of a few unplanned wild camping nights. I would recommend spending a few bucks on international or Skype calls to confirm campgrounds are truly operational before showing up.

The first night of camping was a dream staying on sand near Reserva Natural das Dunas de São Jacinto, about 70 kilometers south of Porto. The sound of the sea and the soft sand was very comforting to me and I was really grateful such a wonderful place was our stopping place for the night. Although the day’s terrain was flat, navigating the continuous urban landscape was tiring; we were almost constantly checking our map app to ensure we were on the right course. We made so many errors and took “the long way” several times so that our odometers read 90 kilometers when we made camp. Navigation is a big frustration of going your own way but something we were mentally prepared for.

About 150 km south of Porto, the modern buildings and bright seaside settlements thin out before Nazaré and the landscape is dominated by forest. It was at this point we realized how unfamiliar we were with Portugal itself. We had seen a forested camping area on the map and decided it would make a nice place to camp that night, however, unknown to us it had been destroyed a year before in a devastating wildfire. The entire area around Marinha Grande was ashen and grey, it was honestly frightening to see. Although a few long sections followed an even cycle path, even the roads are damaged (as of 2018) – partially melted and with a rough riding experience similar to cobblestone. Fortunately, some patches are already starting to recover with wildflowers and shrubs in every color bursting through the soil and deer exploring the hollows.

After two nights of camping we wanted the third night spent indoors at Nazaré Hostel and take it easy. The city is absolutely gorgeous, known for it’s massive waves and extreme surf competitions. Nazaré is what I imagine when I think of Portugal – dramatic cliffs and oceanscape with a little town set along a hill dotted white washed houses and red roofs (thanks Sue and Brian for suggesting this pretty town).

Nazare in the evening.

After three days what do I think of the route? We arrived in Portugal directly from a three month trip in Southeast Asia and managing our private belongings and working with what we already have dictated the way we packed. I have a 40L backpack strapped to the bike rack and am not using actual panniers. This works well most of the time and forces me to travel light but on uneven roads it jiggles loose. My travel companion is was able to get two of his own bikes shipped to us from his home for about 50 USD. The trade off with the huge savings is that the bike I’m using is a little too big and not meant for rough roads. It does seem to be working well for what we have done so far. A nightly ritual is chaining the high value bikes up with a padlock to keep them protected. Edit: at no point in the trip did anyone attempt to take the bikes. We felt the peace of mind was worth carrying around the lock and chain. Drivers seem attentive and we feel safe on the road,  however aggressive dogs have caused us problems. I was actually bitten in the leg south of Nazaré on a busy public road but had enough thick layers on to prevent puncture. Edit: To us, dogs ended up being the most threatening part of the trip, which was overall very safe.

If we enjoy our adventure on the Portuguese coast we will immediately follow up with a two week trip through southern Spain. I look forward to updating you!

3 thoughts on “Bikepacking Portugal (Part One)”